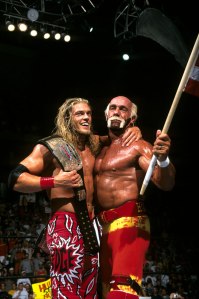 Our son John joined the middle school wrestling team (in part) because he wanted to be Edge, his World Wrestling Entertainment idol and a former heavyweight champion. The chiseled Canadian — known for his menacing sneer, anthemic theme song, oak-like quadriceps and a finishing move called “the spear” — was “the Rated-R Superstar” on the Monday and Friday night wrestling shows until an injury forced his retirement last year. He trash-talked his enemies on camera, brandished his garish world champion belt and carried on a doomed “marriage” with Vickie Guerrero, the brassy and strident onetime general manager of the WWE juggernaut (the relationship turned rocky when a “hidden camera” caught Edge making out with their wedding planner.) But most colorful were his tights…which looked like an LSD trip spray-painted on his thighs.

Of course we all know that that professional wrestling’s backstage dramas, backstabbing and back stories are as scripted as the matches themselves. Yet millions of kids, teens and adults tune in every week and willfully suspend their skepticism to watch this mix of faux violence and telenovela.

What’s interesting is that Edge’s real story is far more interesting than his swaggering on-camera persona. Born Adam Copeland, he used wrestling as an escape from a childhood of poverty and tragedy. His father was not part of his life. His idolized Uncle Gary died when Adam was a boy and left him heartbroken. His single mother never had enough money for luxuries or even a decent place for them to live. After winning a contest entitled him to free wrestling lessons, Edge embraced the sport and never looked back, surviving years of lonely road trips to small-time tournaments before he hit it big.

John knew when he joined the wrestling team that classic wrestling has nothing to do with the pugilistic peacocks he watches every week. It is an ancient and venerable sport in which technique, discipline, fair play and toughness count. It has more to do with the persistence of young Adam Copeland and less to do with the swagger of Edge. We talked about this, and John recognized this in his mind but his heart still yearned to win all his matches. He talked about which hard rock songs he’d want for his own entrance music.

He was flushed and sweaty after his first few practices, but eager to get back. But by the third week he felt discouraged because the other guys on the team were more experienced. Some had honed their skills in wrestling programs in towns that offered them for younger athletes. Others were just more natural athletes. He was in tears after one practice in which he was repeatedly taken down. Still, he wanted to continue, and his coach – a gentle giant of a guy – told Bob that John was doing just fine.

Then came the first match last weekend, at a school gym about a half hour away. About 200 young wrestlers, from Chihuahua-sized third-graders through hulking heavyweights, showed up to be weighed, ranked and paired up. The spectators were as diverse as the wrestlers, a far cry from the Hilfingered throngs at your average football game…I spotted scary tattoos, 80s-style big hair, and homie-style skullcaps along with the Gap-clad dads with their video cams.

And then, there were the tights.

The schools did not have enough uniforms for all the wrestlers, so about half of them got to wear the baggy shorts and basketball jerseys they had put on at home. The other half – including John – squeezed themselves into the unforgiving spandex. I watched him, looking vulnerable and anxious in his green tights and headgear, on the sidelines as his teammates took their turns in the spotlight.

John was paired in three matches. In his first, a more experienced wrestler pinned him in about 10 seconds. I could see my son’s face crumple as he left the floor and moved to the sidelines, where Coach Cody spoke with him gently. My mother’s instinct to run over and comfort him wrestled with the suspicion that he would not want his wrestling buddies to see him being hugged by his mom. I stayed put. Bob left the stands, walked over to John, draped a fatherly arm around his shoulders and calmed him down.

Something interesting happened in the second and third matches. The second match lasted about 20 seconds; the third went longer. John still got pinned but he put up much more of a fight. His head was higher when he left the mat. He had lost but he had still improved.

His mood on the way home was thoughtful but not defeated. He later hung out with his friend Greg, an outstanding swimmer who has competed at the state level. “Nobody wins the first time,” Greg told him.

I thought for a while about how my own son had inspired me, too.  Although I am decades older than him I have a hard time recovering from slights and setbacks.  I do get up and move on, but sometimes I brood too much first.  I wish I could get back to the mat sooner.

Later we talked to John about managing his expectations. “If you continue to work hard, you will be a better wrestler,” we said to him. “That’s what matters.” He seemed to agree. In his heart of hearts I think Edge would too. 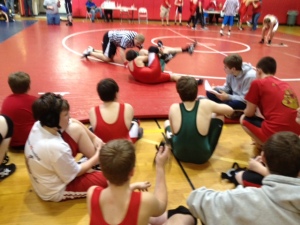 John's second wrestling match. You can see part of his leg behind the guy in red spandex on the mat.

6 thoughts on “What We Can Learn From Guys in Tights”