One does not "get out of" this Rolls; one "emerges" from it.

Going to the New England Car Show in Boston last weekend was like going to a huge family reunion. Within each clan – the Chevys, the Volvos, the Fords, the exotic relatives from Italy and Germany – one could see see how each bloodline has evolved over the years.

Some of these newborn models don’t look anything like the ancestors that I remember from my more than four decades of driving and noticing cars. (The Mustang is a happy exception). The car companies probably want it that way, as they tweak their designs and their marketing to appeal to a new generation of car buyers. Along with adding new features, they surely study the emotional attachments that people have to their cars and the psychology behind their buying decisions.

But as we grow older, does anybody else have a hard time shaking long-engrained images of a brand? 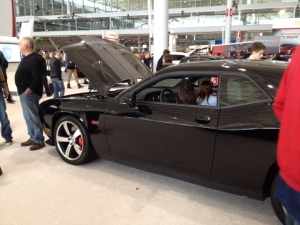 No matter what kinds of sleek new designs the company unveils, the brand name “Dodge” still evokes the image of a car that your least-favorite teacher used to drive in the early 70s. It sounds too much like “stodgy.” Dodge had a sweet-looking retro version of the Charger at the auto show, and it did attract a lot of onlookers. But it is still a Dodge.

I think Dodge should create a brand new subsidiary to make cars with a cooler-sounding name and hide the fact that they own it, like Gallo did with their “Turning Leaf” wines.

Our son Jesse spent a lot of time around the Volvos, since he owns three vintage models. The brand attracts a large and devoted brand of aficionados like Jesse, who likes to tinker with them and can do most of the repairs himself. (Jesse has been a motorhead since birth, often going to sleep with a Matchbox car clutched in each hand.) But the Volvo will forever remind me of the middle-class suburban Philadelphia neighborhood where I once lived. When a new Volvo appeared in a neighbor’s garage, usually a move to a tonier swim club came around the same time, and the for-sale sign went up in front of the small house about a year later. The Volvo was the harbinger of a new, more comfortable financial stage, like a pre-teen boy’s jump in shoe size just before he grows taller.

BMW will always be the first word in the phrase “-driving yuppie scum.” My least favorite executive at the company where I once worked drove one. His second trophy wife was usually with him. Even though my beloved brother-in-law has one I can’t shake that first image.

Toyotas and Hondas seem to be the vehicles for the proletariat; solid, dependable and unglamorous. But I have a special attachment to Toyota because my dad drove them 20 years ago; they were more glamorous back then, especially the Cressida. It was a far cry from the old Pontiac Rambler station wagon that he once drove, later announcing that it was “the worst car I’ve ever owned.” 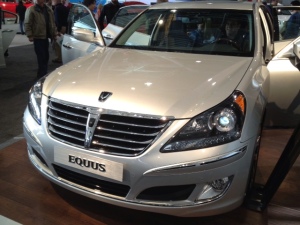 This car reminds me of the Calgon bath oil beads commercial when a lady takes a bath in a tub in her back seat.

The Hyundais, which a few years ago had a pretty tinny image, has been making cars that are both solid and stylish now (full disclosure: I drive one.) Their new luxury “Equus” is so big that the back seat includes an adjustable footrest. It reminds me of that old Calgon bath oil beads commercial when the lady takes a luxurious bath in a tub under the floor of her back seat. She presses one button to draw a curtain and give her privacy from her chauffeur; and another to retract the floor over the tub.

The Rolls-Royce Phantom, the nearly $500,000 car on display at the car show, reminded me of “King Joppi,” the James Earl Jones character in Eddie Murphy’s “Coming to America” film. King Joppi emerged from one of these (you don’t “get out of” a Rolls; you “emerge” from it) preceded by attendants casting rose petals before him.

“If you own a car like this,” remarked Jesse, “you don’t drive it yourself.”

Jesse’s girlfriend Stephanie was drawn to a tuna can-sized Fiat that looked like it could park sideways in a parking space. I was appalled at the back seat, which looked barely big enough for our guinea pig. But I could picture Stephanie, who looks a bit like the young Elizabeth Taylor, tooling around in it like a heroine of a Fellini movie. A Fiat makes me think of Rome, where my sister and I saw thousands of them when we visited decades ago.

Whether it’s a proletarian Honda or a stunning but repair-prone foreign sports car, our vehicle preferences are at least half emotional. Consumer Reports and J.D. Power may influence us, but our long-engrained memories will last longer than the new-car smell.